Bhakal.com is proud of its team.  Our team consists of 12 women with extensive experience… Read more 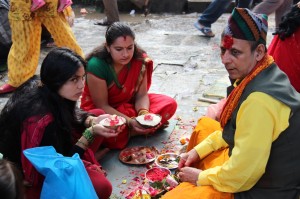 Bhimsena is the deity of commerce and industry, and of fortunes. The Newar community in general and the business community in particular revere the deity for good business.  On the midnight of the ninth day of the lunar dark fortnight in Bhadra (Bhadra Krishna pachaya), August/Sept, the Bhimsena jatra (festival or outing of Bhimsen) is held in Patan every year with spectacular shows of the festival.

After the special festival offerings made to Lord Bhimsena, the priest brings the idol of Bhimsen from the third floor of the three-storey temple at Mangal bazaar in Patan, and sets it in the sanctum of a chariot made ready for the outing of the deity.

Devotees carry the deity on a chariot on shoulder poles around the town with pomp and fanfares. Traditional Newari musical bands leading the chariot play devotional tunes, and some people sing hymns to the deity on the way to the town and back to the temple.

Devotees coming from Kathmandu, Bhaktapur, Lalitpur and the surrounding villages gather at Mangal bazaar, and they make offerings to Lord Bhimsena, and then watch the fabulous outings of the deity.  Some devotees follow the procession with lighted incense in their hands, it is believed that this act of devotion contribute to their success in Business throughout the year.

The Bhimsena temple at Mangal bazaar in Patan was once a one-storey built in 1547. Then King Srinivas Malla rebuilt it in the current three-storey temple in 1601.